Reddit has released a new transparency report, revealing that the number of DMCA takedown requests its receives has rapidly increased. In the first half of this year, 738,010 pieces of content were flagged by rightsholders, already exceeding the total for 2021. In addition, the number of copyright-related user bans has shot up as well.

reddit-logoWithout doubt, Reddit is one of the most popular user-generated content sites that exists on the Internet today.

The community-driven news and discussion platform has been around for more than 17 years and, over time, its popularity has steadily increased.

Reddit detailed these trends a few days ago in its latest transparency report. Previously the company shared fresh data annually but then switched to a bi-annual schedule to provide more timely updates.

Regular updates are helpful because a lot is happening behind the scenes. In the first half of this year, many of the key figures already exceed volumes for the whole of 2021, including the number of DMCA takedown notices.

During the first months of the year, copyright holders asked Reddit to remove a record-setting 738,010 pieces of content. Images and videos are included, along with links that point to infringing content shared elsewhere. The majority of these flagged items were removed by Reddit.

For comparison, during the whole of 2021, rightsholders reported 665,898 pieces of content, and a year earlier, only 517,054 were flagged as copyright-infringing.

Reddit doesn’t offer an explanation for the recent increase in takedown volumes, but the platform makes it clear that not all removal requests are blindly followed up. In fact, nearly a quarter are rejected.

This rejection percentage is relatively high, but it’s mostly due to ‘duplicate’ takedown requests. Other, less common rejection reasons, include a lack of copyright infringement and fair use. 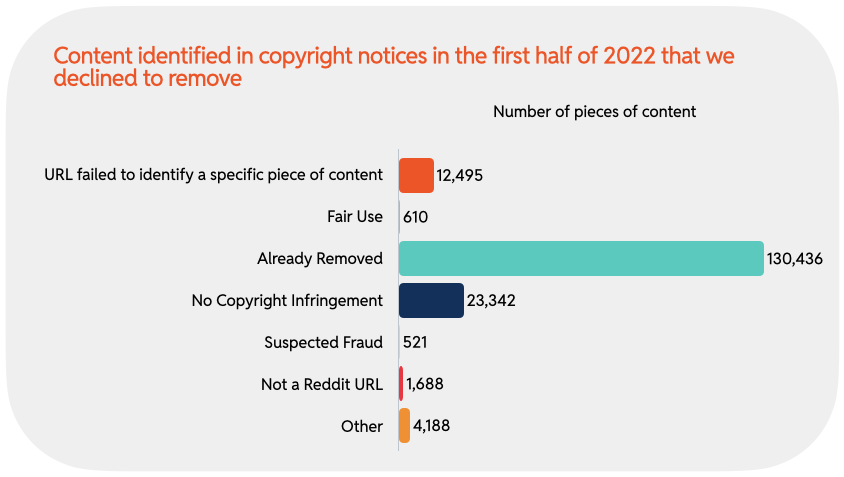 To illustrate a fair use example, Reddit reports that a religious organization requested the removal of a video post that included part of a livestreamed worship service. This falls in the fair use category, according to the platform’s operators, as it was used for the purpose of criticism.

“Because the creator of the Reddit post used only a limited portion of the livestream to make a critical point about the religious organization and its teachings reflected in the clip, we rejected the notice on the grounds of fair use,” Reddit writes.

Subreddit and Use Bans

Since then, the situation has changed.

During the first half of 2022, the numbers were much higher. Responding to repeated copyright complaints, 3,859 users lost their accounts while 1,543 subreddits were banned.

These user bans are in part the result of legal obligations. Under the DMCA, Reddit is required to implement a reasonable policy to deal with repeat copyright infringers on its platform.

/r/PiratedGames was one of the subreddits targeted earlier this year. The thriving community of more than 300,000 members explicitly prohibited links to infringing content but some posts and comments still slipped through, resulting in a ban.

Interestingly, that episode also showed that bans can be undone. A few hours after we wrote about the subreddit ban, Reddit informed us that the community had been reinstated and it’s still thriving today.