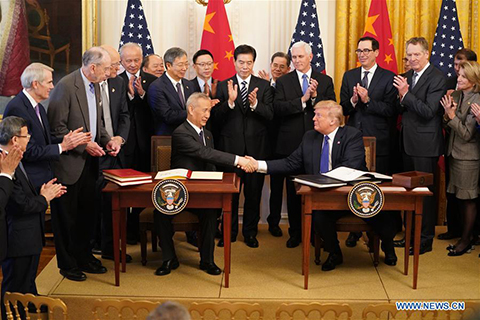 WASHINGTON - It is a moment that attracts the world's attention. On Wednesday noon in Washington, Chinese Vice-Premier Liu He and US President Donald Trump formally signed the phase-one China-US economic and trade agreement.

The two sides, bearing the overall interests in mind, have taken an important step forward along the right path of resolving the economic and trade differences, which will serve as a sound foundation for properly handling the follow-up problems, bring bilateral economic and trade ties back on the right track and inject positive energy into the stability and development of the global economy.

It is a move that serves the interests of China, the United States, and the world as a whole.

The signing ceremony, held at the White House East Room, came after nearly two years' on-and-off tough trade talks. It is a hard-won phased outcome, showing that the world's two largest economies are seeking a more rational way to break the deadlock.

Cooperation has also been proved the only right choice for the two sides, and problems should be solved with Beijing and Washington meeting each other half way.

China and the Untied States should stick to dialogue and consultation based on the principles of equality and mutual respect, as there are always more solutions than difficulties.

Despite their differences in political system and ideology, among others, China and the United States share tremendous common interests. Seeking common ground while shelving differences is vital for the China-US trade negotiations to break the ice.

As long as the two sides closely follow the fundamental interests of the two peoples and respect each other's dignity, sovereignty and core interests, there is no problem that is too difficult to overcome.

The agreement ranges from expanding bilateral trade in such sectors as agricultural products, manufactured goods, energy, and service, further easing market access, to enhancing the protection of intellectual property rights.

The two sides also agree to establish a bilateral mechanism for two-way assessment and dispute settlement, and the United States promises that it will remove part of the extra tariffs imposed on Chinese commodities.

It is safe to say that the agreement has considerably addressed concerns of both sides, as not only does it conform to China's general direction of deepening its reform and opening up and advancing high-quality development, but is also conducive to meeting the growing demands of the Chinese market and maintaining a balance of international payments.

Meanwhile, it is a boon for industrial and business communities and consumers of both nations, as it has achieved a result of win-win and mutual benefit, which is also well received by the international community and financial markets.

What China has learned from the signing of the deal is that the more complicated the situation is, the greater composure is needed. It is also critical that China can manage its own things well.

The nearly two-year China-US trade negotiations coincided with a critical period as China is working to achieve its first "centenary goal" of fully building a moderately prosperous society in all respects.

In the midst of a complicated international situation, a demanding task for domestic reforms and development, and various kinds of doubts, China's economy is not crushed as some predicted at the begining of the trade disputes. Instead, it has maintained a moderate growth of more than 6 percent.

As of the end of last year, China's economic output has approached $14.49 trillion, with per capita GDP exceeding $10,000. Facing pressure, Chinese businesses and public have become calmer and more mature.

The signing of the phase-one deal, however, is by no means a once-and-for-all deed, nor does it indicate that all is well from this moment on. The twists and turns in earlier stages of the trade talks show that signing of the deal is but a positive first step for resolving the economic and trade issues between the world's top two economies, and the top priority now is to implement the deal.

As an old Chinese saying goes, every success depends upon good preparations. Beijing and Washington must fully recognize the persisting, intricate and challenging nature of the China-US trade issues. The two sides shall follow the principles set by the two heads of state, keep economic cooperation on the track of mutual benefit and win-win outcomes, make full use of the newly-established dispute-resolving mechanism and other platforms for dialogue, meet each other halfway along the right path toward solving the issues, and get off to a good start for China-US economic and trade ties in the new era.

This year, China is set to achieve its goal of becoming a moderately prosperous society in all respects and will eradicate absolute poverty for its people. A China that continues to open up will make greater contributions to the world economy. Ultimately, a better China needs a better world, and a better China helps make a better world.

Full text in Chinese and English：