Over the recent years, some emerging technologies, like artificial intelligence(AI), blockchain, cloud computing and 5G technology which have contributed to the development of the digital economy, have integrated deeper with the real economy. At the same time, non-traditional risks have been growing. Consequently, when it comes to data management, a common issue is raised for the international community. That is how to protect personal data rights and national data security while ensuring the circulation of the factors of Big data and facilitating the digital economy. This challenge leads to a higher standard for data security and privacy protection. In addition, some new technologies-privacy-oriented cryptography, differential privacy, privacy-oriented trusted hardware, and privacy-oriented AI-related to privacy protection also come under the spotlight in academic circle and the science and technology industry. For the global enterprises, it is particularly important that whether they can achieve innovation through those emerging technologies and develop market share through their competitive advantages, so as to realize sustainable development. In order to gain more insights, IPR Daily worked together with incoPat to conducted a statistical analysis of the patents filed before March 19th, 2021 for emerging technologies associated with information privacy.

The technologies involved in this study are from four fields: privacy-oriented cryptography, differential privacy, privacy-oriented trusted hardware, and privacy-oriented AI. The study group counted the number of the open patents registered by companies before March 19th of this year and listed the top 100 achievers. Among the top 10, most come from China and the US, and four of them have secured over 200 patents. Ant Group takes the first place with 740 patents, much more than other countries. Following the best scorer are Microsoft, Alibaba, and Ping An Insurance(a Chinese company) which have 305, 299, 282 patents respectively. 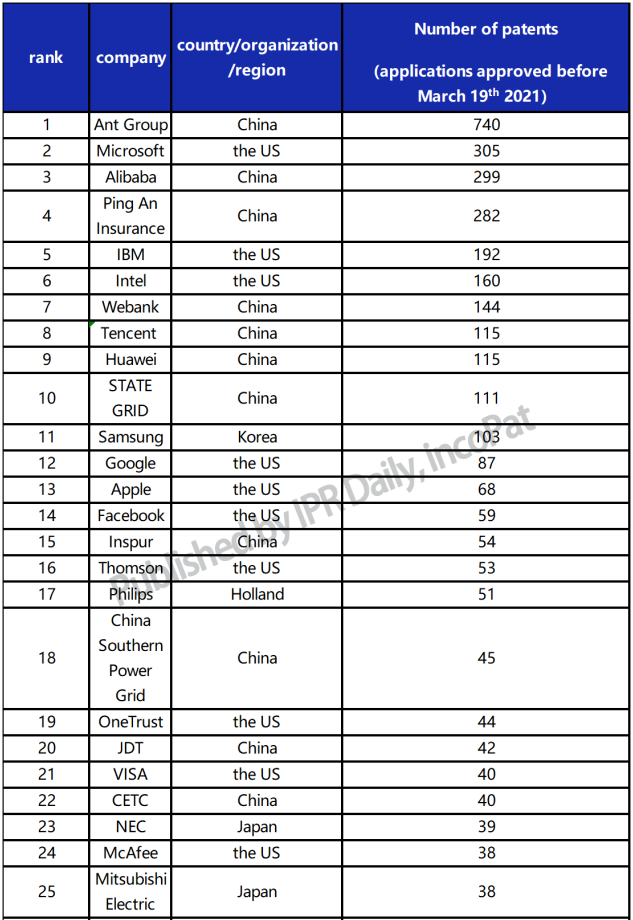 These companies are from 13 different countries, organizations or regions. Chinese firms dominate the list by earning 39 places, followed by the US firms which get 37. there are 9 Japanese companies, 4 Korean companies and 2 German companies on the list. Two Indian firms also squeezes into the list. While the remaining places are respectively taken up by companies from France, Iceland, British, Ireland Holland, Canada, and Finland.

The location of the enterprises(see chart)

Intellectual property rights and firm performance in the European Union

The Road from Quantity to Quality in Chinese Innovation